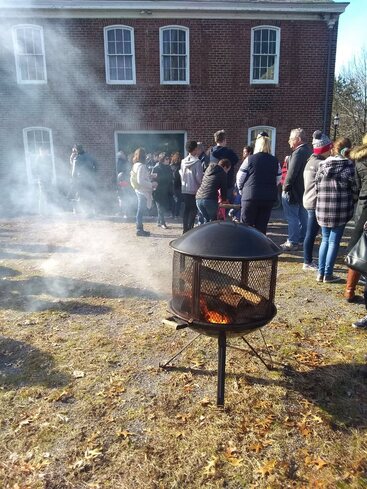 Annual Hogmanay Celebration at the Trent House.
When the House was opened as a museum in 1936, a Trent House Commission was formed to establish, maintain, and manage the House Museum.  A furnishings committee or “Women’s Committee” oversaw the furnishing of the House in the 1930s, using the 1726 probate inventory as a guide, while the Garden Club of Trenton accepted the responsibility of restoring the Trent House gardens.  In 1957 the Trent House Association was formed, gaining its status as a non-profit organization in 1975.

The Trent House Association works in cooperation with the City of Trenton to enhance the historical integrity and interpretation of the William Trent House through stewardship of the site, research, and public programming.

For many years the Association was responsible primarily for acquiring and preserving the furnishings in the historic house, with full-time professional staff employed by the City who provided overall management and conducted programming.  In 2011, these staff were laid off as part of overall municipal budget cuts. Over the subsequent years the Association has taken on increasing responsibility for both managing the site and providing programming. In addition the Association has taken the lead in acquiring funding for research and public history projects and for building strong relationships with other local cultural and educational institutions as well as with the City administration. The Association is governed by a board of fifteen trustees and holds an annual membership meeting in May.

Over the past five years programming at the William Trent House has expanded to include more family and community events such as an annual ice cream social, a colonial harvest festival, and Hogmanay, the Scottish New Year’s celebration, in recognition of Trent’s Scottish heritage; a regular program of monthly presentations that include lectures, book readings and signings, poetry readings, and music; exhibits on a variety of topics such as colonial daily life of all Trent era residents - the family and its enslaved workers, archaeological artifacts from Native American occupation and European colonization, and house restoration history; poetry, painting, and sculpture exhibitions; and enhanced tours on Colonial Architecture, slavery in NJ, the House during the Revolutionary War, and others.