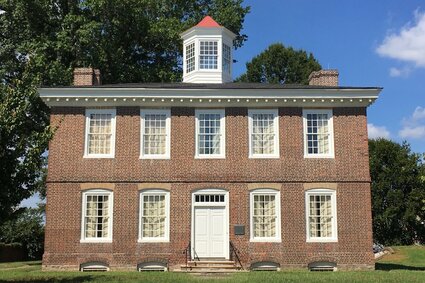 This article was originally featured in the May 2019 issue of "Town Topics - Princeton's Weekly Community Newspaper since 1946".
​
May 29, 2019
​The William Trent House Celebrates Three Centuries
By Anne Levin

Imagine an 800-acre estate on the Delaware River, centered around a stately brick house topped with a white cupola. That was Trenton in 1719, the year that Philadelphia merchant William Trent moved his family and enslaved servants up the river to what had been a traditional Lenape site.

That acreage, of course, has long been home to office buildings and parking lots. But Trent’s two-story home has been a museum for 80 years — since June 1, 1939, to be exact. So it makes sense that the William Trent House is beginning a celebration of its 300th birthday on the evening of June 1, 2019.

The party is being co-hosted by the Institute for Classical Architecture & Art, Philadelphia Chapter, and will include food, drinks, music, guest speakers, and tours led by experts who have been involved in interpreting and restoring the National Historic Landmark. Another big fundraiser is in October.

It’s all part of an effort to celebrate the site’s past while raising its profile for the future. “We are not well-enough known, so we are using this anniversary as a way to get ourselves more broadly known across the region,” said Carolyn Stetson, president of the Trent House Association.

“That’s one of the reasons we are partnering with this group from Philadelphia. Some of them will be seeing the house for the first time.”
Trent and his family lived in the house for several years, but it has also been home to numerous families and served as the official governor’s residence for a time. It was occupied by Hessian soldiers during the Revolutionary War. Contrary to what had been assumed, the house was most likely not designed by an architect.

“The bricks for the house were probably made on site,” said Stetson. “One of the things that make the house so special is that in 1724, William Trent died, and in 1726, an inventory was done of the furnishings, so we have been able to furnish it according to that inventory. Where we couldn’t get authentic antiques, we had reproductions made. We’re really lucky in that most of what a visitor to the house would see today is all original. Very little has had to be replaced.”

Among the possessions listed on the inventory were human beings — 11 slaves. “Trent was a merchant and a trader, and one of the things he traded in was people,” said Stetson. “Most people don’t know there were slave owners in New Jersey. But there were, indeed, particularly among some of the wealthier people. Trent had 800 acres, so he needed people in the house and on the land. We’ve been doing a lot of research into who these people were. And it’s been hard.”
​
One of the names researchers have found is Yaff. “We can tell by his value and his age that he was most likely the butler,” said Stetson. “Someone found an advertisement from after Trent had died, revealing Yaft had gone on to another owner and then took his freedom. We are working now on a slavery interpretation, so people who visit here don’t just learn about Trent and his wife.” During June, an archaeology project will be held on the grounds. Graduate students from Monmouth University, under the director of Professor Richard Veit, will be working with archaeologists from Hunter Research to try and identify a rectangular anomaly discovered by ground-penetrating radar. “We are guessing that it could be the foundation of Mahlon Stacey’s house,” Stetson said. “Stacey, with a small band of Quakers from Yorkshire in England, was the first European to settle at the Falls of the Delaware in 1679. When he died, his son sold 800 acres of his property to Trent in 1714.”

The June 1 event is open to the public with tickets ranging from $40 for students to $125. Free parking is available at the site at 15 Market Street. The October 12 fundraiser, which will be held at Trenton’s Trinity Cathedral, will center around a presentation on Colonial Foodways by Chef Walter Staib of Philadelphia’s City Tavern, followed by a colonial dinner.

“This is a fascinating place listed on the State and National Registers of Historic Places,” said Stetson. “We want more people to know us.”